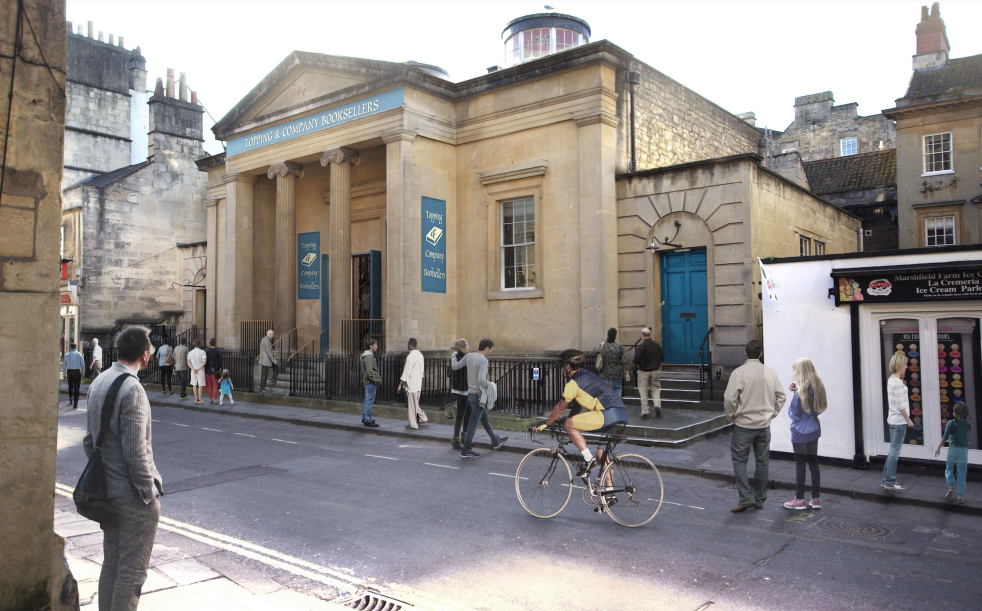 Proposals have been consented for the relocation of Toppings bookshop and associated alterations to the Grade II listed Friends’ Meeting House on York Street.

The historic has been vacant for a long time, and the Trust welcomed the prospect of bringing it back into use. We undertook a site visit and pre-application consultation with the architect. We did not oppose a similar application consented in 2008 which also proposed the opening of the blind doorway.

The building was originally commissioned as a Masonic Lodge from the architect W Wilkins (Architect of the National Gallery) and as such had symbols and signs of secrecy and privacy best exemplified by the blind door and the closed railings. It is an important exemplar of Greek Revival architecture in Bath, though is Grade II rather than higher, possibly due to the historic changes in the 19th Century which included the opening up of the ‘blind windows’.

On balance, the majority of our Architecture, Planning, and Place Committee felt that although the opening of the doorway would constitute ‘harm’, it was unlikely that the Meeting House could come back into public use, and maintain viable commercial operation without opening the doorway. Therefore, the public benefit of bringing this property back into cared-for use, with public access and some enlivening of the vitality of the conservation area, would outweigh harm to the listed building.

You can read our response in full here.

We welcomed the opportunity to advise the architect and applicant on the proposed interventions and heritage considerations.

We have submitted further comments in response to ongoing application 20/04801/LBA regarding commercial signage. We have concerns that the proposed volume and scale of signage would result in cumulative harm to the façade of a Grade II listed building and the wider streetscape setting of the conservation area.

You can read our response in full here.