When English Heritage say that a listed grade I or II* building is ‘at risk’ they mean it is vulnerable through neglect and decay rather than alteration or demolition. Identifying buildings at risk is a way of pinpointing targets for solutions for its preservation. The Trust is concerned for the future of unused buildings that are in a poor and dilapidated condition. Bath is fortunate to have few such buildings; however there are buildings that we consider urgently need new uses secured to ensure their improved condition and long-term maintenance.

English Heritage keeps a list of “buildings at risk” which are considered to be in a state of neglect or decay. Currently there are three listed buildings and structures at risk in Bath:-

The building is listed grade II* and it’s condition is described by English Heritage as “fair and vacant”. The Trust is very concerned that a Grade II* listed building a World Heritage Site has been allowed to deteriorate to such a condition and is relieved that some essential works have now been undertaken.  The future of the building is still uncertain.

Dating from 1815, Cleveland Baths are believed to be the oldest surviving public outdoor swimming pools in England. At the centre is the former caretaker’s cottage with attached changing rooms in the form of a miniature Georgian crescent flanking the swimming pool. The Baths were closed in 1984 and used for a short time as a trout farm. A feasibility study was completed March 2006 for the Cleveland Pool Trust.

Other buildings in the city of concern and potential candidates for the listed buildings at risk register include the old Corn Market. Whilst the Trust is not actively campaigning to restore this building it is supportive of local efforts to save it and bring it back into use. 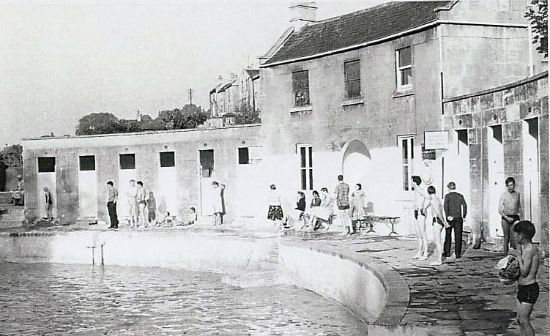