Planning approval was granted in 2003 for the re-development of the southern part of the Bath retail centre. The scheme will include a mix of new shops, leisure facilities, restaurants and homes, set within a series of newly designed streets and public squares.

Phase I of the development will started in spring 2007 this included the demolition of the existing buildings and clearance of the site. The construction of Phase I will take around four and half years to complete, this will include the development of new bus station, which is modern in design and highly controversial, the refurbishment of Bath Spa Railway Station. Phase II will see the development of a new Debenhams department store, 58 new shops, new restaurants and cafes, 93 apartments and underground car park. These buildings aim to be delivered in 2010. They will be constructed in a neoclassical style clad in bath stone. 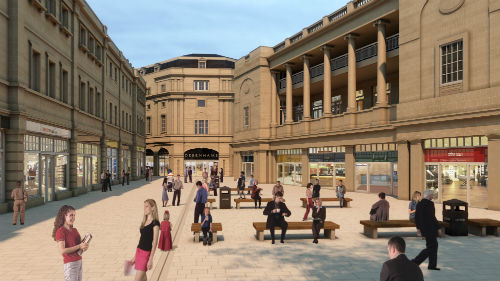 The Architecture Committee has welcomed proposals for the demolition of the existing 1960’s bus station and the redevelopment of the shopping area. The poor condition of the existing buildings had detracted from the character of the city centre for far too long. In essence the scheme is in agreement with the Trust, particularly the requirement to use Bath stone ashlar. However, the Trust is concerned about the use of Bath stone veneers as proposed by developers and associated construction techniques. Whilst the mock façade constructed looks effective we are concerned about the durability of the veneers. We have been writing to the developers, Multi on this matter and however so far we have not received sufficient reassurances from them. We will be continuing to seek clarification and will remain vigilant over the construction of the scheme and elements of the scheme yet to be agreed such as shop signage and landscaping works, especially the works to the Station forecourt. We will encourage the retention of historic materials and use of pennant stone paving throughout the scheme.