The Abbey had an interesting year in 2017 with strong opposition to their plans to remove the Gilbert Scott nave pews from both SPAB and the Victorian Society (VS).  The VS took the Abbey to ecclesiastical Consistory Court in October 2017 and a 3 day hearing was held within the nave, where both the VS and the Abbey argued their cases for and against removal of the pews through lawyers and a series of experts in front of an ecclesiastical judge.

You can read more about the court hearing from Bath Newseum.

The Trust has been closely involved throughout the story of these proposals, engaging early with the project team to give advice and feedback.  We opposed the proposal to move the Montague Tomb which was a part of the plans that were subsequently dropped. We have continued in our established position that the loss of the pews (in actual fact correctly called benches) is acceptable in that it will help the Abbey achieve their plans to create a 21st century event venue for Bath where both religious and secular events can be held. This will in turn better reveal and open up the Abbey to a wider public audience who can appreciate its beauty and significance. This is a public benefit that counters the less than substantial harm caused by the loss.

In addition, the revealing of the old ledger stones and the opening out of the nave space will allow the Abbey to be appreciated as it was in Georgian times and for aspects of its architecture to be better revealed (for example the grand 16th century pillars). Whilst we acknowledge the importance of Gilbert Scott’s work, much of it does still survive within the Abbey and is therefore legible as an important historical layer, but in our view the building’s significance encompasses its whole historical story and its potential to adapt to the needs of a 21st century society.

A full record of the Trust’s consultation with the Abbey Footprint team can be read here.

In January 2018 the Court ruled for the Abbey’s proposals to remove the pews and the works commenced as of Summer 2018. The pews would be replaced with stackable chairs to facilitate disabled access, and enable stonework repairs to the floor and ledgers. 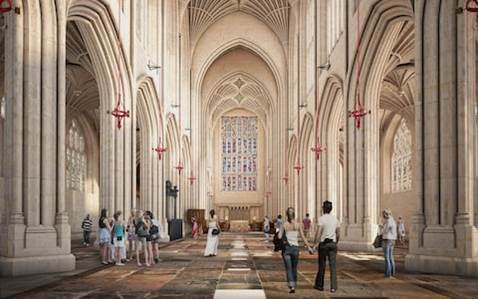