One of the Trust’s core charitable objectives is to protect Bath’s countryside. Bath is an urban World Heritage Site in a rural landscape setting. In order to maintain this the Trust will defend strongly the planning restrictions of the Green Belt and the Cotswold Area of Outstanding Natural Beauty. We continue to campaign for the surroundings of the World Heritage Site to be recognised by a formal buffer zone.

The trust considers matters of concern to Bath’s surrounding countryside through its Environs Sub-committee, which includes membership from the 14 parishes adjoining the boundary of the City of Bath. 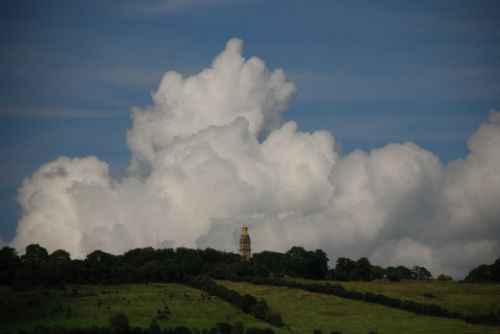 The Woolley Valley is located on the outskirts of the World Heritage City of Bath. The valley is classified as an Area of Outstanding Natural Beauty and designated Greenbelt. In 1992, the Valley was deemed so special that it was placed under an Article 4 Direction, which removed permitted development rights as to protect it’s intrinsic rural character and natural beauty.

Golden Valley Paddocks have been proceeding to develop land within the valley since 2010.  5 planning applications for development have been submitted over the last 2 years, all of which have resulted in refusals. Despite this no enforcement action has been taken by the Local Planning Authority, B&NES Council and development is still continuing.

Major alterations have been made to the existing access; barn and land. A mobile home has been placed on the site and there are major alterations taking place on the land with the erection of 10 significantly large chicken barns. The development has already caused major problems relating to noise, visual impact and changes in water courses adversely affecting local farmers and residents. This development is destroying the beauty of the valley and its un-spoilt rural character- the very aspects, which have given the valley its special status.

For more information and how details of how you can help to support the local campaign to protect the Valley go to http://savewoolleyvalley.co.uk

OBJECT An Article 4 Direction is in place in the Swanswick Valley to allow for the consideration, through the planning system, of the impact of development on the special character of the AONB, the special character of which contributes significantly to the landscape setting of the World Heritage site, which is of Outstanding Universal Value. This pond currently exists, it is unauthorised and in breach of planning regulations. The site is visible within the AONB and can be seen from an adjacent public foot path.

The pond is not a natural feature of the landscape, it neither conserves nor enhances the character and local distinctiveness of the landscape. The artificial pond has an adverse impact on the natural beauty of the Cotswold AONB. The development therefore fails to comply with Policies NE1 and NE2 of the B&NES Local Plan and PPS7.

The pond is inappropriate development in the Green Belt, its appearance is harmful to the character and openness of the Green Belt. In our view no very special circumstances exist to justify its creation. The proposal is therefore contrary to Policy GB2 of the B&NES Local Plan and PPG2.

The Trust therefore recommends that this application is refused and that the necessary enforcement action to remedy the breach and restore the land is taken.

Erection of agricultural building, alterations to access, formation of track and hardstanding, siting of temporary timber-clad mobile home for an agricultural worker

The site is located in the Greenbelt and in the Cotswold AONB. An Article 4 Direction has also been placed on land in the Swainswick Valley and prevents certain agricultural works from being undertaken that would normally be permitted development, this is so all agricultural development can be properly managed in this sensitive area. The Trust considers that the proposed buildings and the formation of a permanent track and hardstanding are inappropriate developments in the greenbelt. Policy GB1 of the B&NES Local Plan states that new buildings in the green belt will only be allowed in very special circumstances. The justification stated in the application does not appear sufficient to allow this development in the green belt, which will include two substantial buildings. These buildings and the formation of a track and hardstanding will detract from the openness of the greenbelt and adversely affect the natural beauty and character of the AONB and the landscape setting of the World Heritage Site. The proposal is contrary to Policies NE2, GB1 and BH1 of the B&NES Local Plan and guidance contained within PPG2 and should be refused.