Bath Preservation Trust (join here) was founded in 1934 as a small pressure group, with the object of protecting the city’s unique architectural heritage. Its first action was to fight plans to pull down parts of the picturesque Georgian city of Bath, England, to make way for a new road. The road was never built. Since this victory, the Trust has saved hundreds more listed buildings from demolition, and has successfully confronted many similar threats to the city. Today the Trust has approximately 1,400 subscribing members from the UK and overseas supporting its work.

The Trust exists “to preserve for the benefit of the public the historic character and amenities of the City of Bath and its surroundings”.  In a city with such a wealth of heritage there are inevitably difficult challenges to be faced in reconciling the demands of a modern thriving city alongside the exceptional level of conservation care demanded in a World Heritage Site. The 21st Century has brought with it the added pressures of encroachment to the city’s green belt setting. The role and influence of the Trust is needed as much now as ever before.

The Trust believes the protection of the unique qualities of the city and its environs is vital to Bath’s success in creating and maintaining a sustainable and buoyant economy for the future. Much of the Trust’s work involves engaging with those whose decisions determine the city’s future, inspecting and responding on planning applications in the conservation area and to listed building consent applications, providing informed statements at planning meetings and expert witnesses at Public Enquiries.

The Trust is also a major provider in the tourist economy as it owns and runs museums and educational activities at No. 1 Royal Crescent, the Museum of Bath Architecture, Beckford’s Tower and the Herschel Museum of Astronomy, all of which have been restored by the Trust and provide a valuable resource for the city and its visitors.

The Bath Preservation Trust is an independent charity, registered with the Charity Commission of England & Wales, and is a company limited by guarantee. It has a voluntary Chairman and board of Trustees, approximately ten permanent staff and 1,400 subscribing members. With prudent management the Trust is financially self-sufficient and independent of any controlling agency; a unique position for a heritage organisation to hold within the UK.

To find out more about the Trust and what we do, you can access our biannual newsletter publication Bath Matters, and our Annual Review, free online. 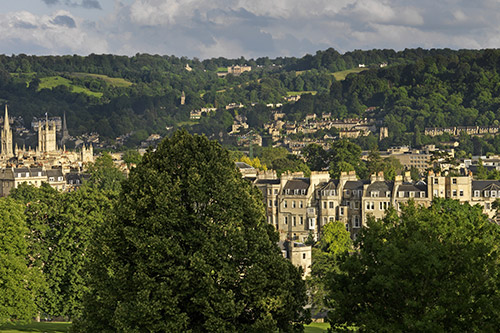